José is Chief Revenue Officer México, responsible for all activities that generate income, as well as optimizing gross margin.

Graduated in advertising and public relations from the Antonio de Nebrija University. José began his professional career in early 2011 in Madrid at Vizeum media agency, which belongs to the Dentsu Aegis Network. After, he became an Account Executive in the Antevenio Group. For some years he accomplished commercial and account management functions in the field of performance marketing, attracting and retaining important strategic clients.

In 2017 he assumed the commercial direction for Argentina at the Buenos Aires office and in 2019 he settled in Bogotá as Antevenio’s Country Manager for Colombia. He developed and consolidated the Colombian market in Antevenio and created the production and operations department, making the Colombian office independent, as it has previously functioning as a Mexican commercial branch. 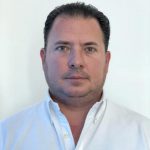